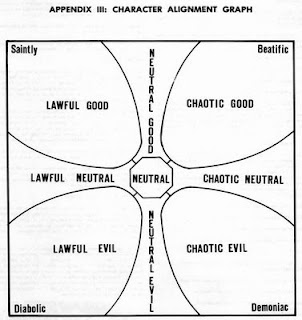 Do you remember this image?

A bit of history. In imitating the pen and paper game, Dungeons & Dragons-like video games have long exposed an alignment field. This was a text field without game consequence. Making choices that could affect the game or character’s moral status is a more recent phenomena. Knights of the Old Republic (2003) pops into mind for most people as the origin of light side and dark side choices, but Fallout (1997) and Planescape: Torment (1999) both use a similar system. In any event, morality choice has exploded in games. In addition to the Fallout and KOTOR franchises (including SW:TOR), Fable, Sacred, Bioshock, Overlord, GTA, Mass Effect, Force Unleashed, and inFamous have joined in.

Looking at that list illustrates a successful invasion of roleplaying concepts. Shooters and action games routinely include elements that were once only the domain of the rpg. Between such a feature creep and the growth of open world games, it seems we’re teaching computers to substitute for a good Dungeon Master.

Back on topic from the last post. Morality choices sound fantastic. And the games in the list above range from good to great to sublime. Then why do I judge the use of moral choice in games a failure?

First, our morality is immature and unsophisticated: Saintly or Demoniac, to quote the chart above. Games have never hid from this fact. The original Fallout’s moral titles are Champion or Childkiller. The updated version in the series follows with “Last, Best Hope of Humanity” or “Scourge of Humanity.” To illustrate an example, inFamous offers the options of helping the cop and accepting his reward, or killing him and taking what he has. At least that evil choice has expediency to recommend it. More often, evil choices are evil for the sake of evil, without logic, explanation, or motivation. Kick the puppy.

More to the point, the moment of decision making occurs before the start of the game. As moral choices are binary, players follow by making a wholly binary character. “I’m going to play good,” and so every choice in the game is predestined. Individual game decisions don’t matter. As game designers, we can’t be surprised. We’ve tied in game advancement, abilities, and now Achievements to a character’s alignment state, rewarding them for reaching the ends of the alignment spectrum. Thus, players look for opportunities to farm alignment status in the same way they look for ways to harvest experience points.

As a result, the only thing tested is the ability to identify moral and immoral choices. Given how stark the choices offered, this isn’t difficult. Moreover, players would rebel against such difficulty or obfuscation. It could lead to their 100% good character making an evil choice. It gets in the way of them grinding to a final alignment state. Woe to the game that makes moral choices difficult to distinguish. Indeed, we’ve solved this problem by outright identifying which is which through user interface.

What’s worse, games don’t deliver the promised gains from the morality system: replayability. The game’s plot, villain, and gameplay don’t change. Only a small amount of content, if any, is exclusive to players of one alignment state or the other. A couple side missions, perhaps. In most cases, the differences between moral and immoral play can be reduced to:

So why have game makers been attracted to moral choices? They promise depth and replayability, but the cost:benefit is high. What work is required falls on writers and voice actors. What does that tell us? There’s little effect on game design … or the player’s experience.

Soon: How can we fix moral choices?